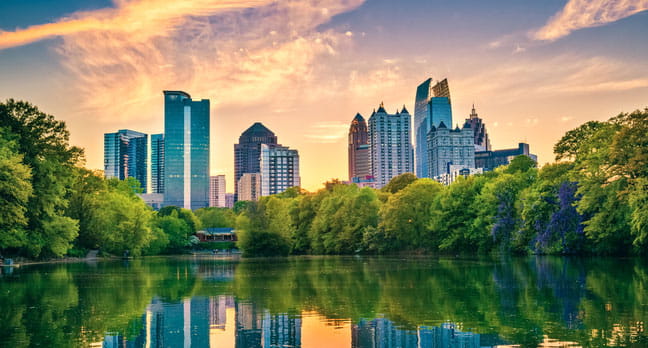 So if you want to be in the know about Atlanta's impressive entrepreneurship scene, here are eight names you need to know, and what you can learn from them:

OK, this might have grown way beyond a small business, but this startup definitely works hard to target small businesses. As the industry standard in e-mail newsletter and mailing list management, MailChimp's CEO has created a successful business based on two elements most other B2B startups avoid. These are small business clients as opposed to big corporations, and email, one of the oldest technologies in the e-book of online marketing. Many may claim email is dead, but Chestnut swears it's still the prime marketing tool for e-commerce. His numbers suggest that for every dollar you spend on email marketing, you get $43 in ROI.

What can we learn from Chestnut? Don't always go with the flow and believe the critics, sometimes it's just about sticking to what works.

Across the world, and specifically in startup hubs, a new kind of office is emerging; the co-working space. What makes Open For Business different than the WeWorks and the Mindspaces of the world is its clientele. Open For Business caters solely to female entrepreneurs, giving them the right conditions, perks and amenities to succeed in a business world that doesn't always help women get ahead. According to one of the entrepreneurs, the best part of Garner's innovative endeavor is the female companionship. The co-working space provides mentorship, workshops, and even local coupons, all focused on the specific challenges and needs women in business have. According to Garner, it's all about helping women follow their dreams. Nicole seems to have found a target audience which current solutions just don't cater to, implementing a very special kind of “Deep Blue Sea” strategy.

The lesson we learn from Garner Scott is a simple one, sometimes there's a specific segment of the target audience that isn't being catered to as they should be. When that's the case, it's our job to create a compelling offering made just for them.

Lisa Jones took it upon herself to fix some of Atlanta's most derelict neighborhoods. Her non-profit organization, HouseProud, differs from other agencies by focusing on a specific area of the city (an NPU-specific crescent of communities south of downtown, from Summerhill to Cascade) and connecting with the communities in those areas to create personal connections with clients. With a meager budget of $389,000 a year, Jones and her organization make a real difference by keeping the operation lean, paying only two full time salaries, with the rest of the money going to supplies. By properly managing resources and focusing on creating strong relationships with a small number of clients, Jones's agency seems to be working way more effectively than others in the field.

Jones can teach us all something about managing a lean business. By understanding the business's ad hoc needs and paying for each as they go, rather than paying for full time talent, they managed to cut costs drastically.

With a degree in Microbiology from UC Davis and experience from two of California's most revered microbrews, Herman might just be brewing the best beer in Georgia. It's not a coincidence either. Matt Shirah, the brain behind Scofflaw's inception, took Herman on as a result of his amazing reputation. He wanted to bring in the best of the best, in order to expand the brewery from its humble beginnings in his sister's basement. Currently Scofflaw has an 18,000 square foot “laboratory” where they mix and brew some of the best barrels in the Atlantic southeast.

Travis is a prime example for understanding how you can add value to a new enterprise that was started by someone else, showing you don't have to be a founder in order to have an impact on the company and product. Don't forget that you have expertise and experience that make you qualified, utilize this experience to build and change whatever company you're managing.

TechStars, the global network of startup accelerators, needs no introduction. But TechStars Atlanta, a relatively less central accelerator to the ones in New York, San Francisco, or Boston, seems to be gaining international appeal thanks to its leader. With applications coming in from India, Israel, and Russia, the Atlanta accelerator seems to be creating a global brand. Cohn has said that his major goal with TechStars Atlanta is to make Atlanta one of the premier startup hubs in the world, and he's doing that by bringing in a mixture of local and global new businesses to work together in the accelerator.

The TechStars approach shows how to take your huge vision and implement it by utilizing very practical down to earth tactics. Cohn teaches us something simple, every vision should come with actionable tactics that can realize it.

Soul Food Cypher is quite an interesting organization. According to its co-founder and executive director Alexander Acosta, its mission is to showcase the art of freestyle and lyricism to the wider masses. The company's most popular vehicle to do that is One Hundred, a mass freestyle session. There's no microphone and the DJ is a beatboxer. Sort of like a freestyle fight club, anyone who shows up to the One Hundred (which is usually packed with participants) can get their turn at freestyling. A lot like Tyler Durden in fight club, Acosta claims that people's daily facades fade away when they're freestyling, and they see who they really are.

Alexander teaches us that our first task is to understand what our customers want, provide them with something that they can't get anywhere else, and give it to them in spades - which will create a strong brand and viral reach.

Eric Robbins is not your run of the mill local Jewish leader. Robbins finds a new and interesting partner community in Atlanta, its vast Latino community. Robbins' philosophy is that the only way for Atlanta to become a truly great city is to learn about each other's cultures and heritage, and find where different cultures can help and identify with each other. Robbins believes that Jews and Latinos have a similar heritage in common; both communities have come to America under challenging circumstances, and he sees that as a common ground for a strong relationship between the two cultures.

Robbins approach teaches us that we can find strategic partners in the unlikeliest of places, all we need to do is think about our common interests.

Being voted Most Admired CEO in Atlanta three years in a row is nothing to sneeze at. Dan Forsman seems to have a knack for getting colleagues, competitors and the Atlanta business community at large on his side, as evidenced by the huge support he's been getting for the past three years from the business community. Whenever he accepts his award though, he focuses on what makes the company great (growth, innovation and culture, according to him) rather than talk about his own personal accomplishments.

All around Atlanta in various industries, we're seeing smart, strong business leaders making interesting choices in order to further their companies. From hosting mass freestyle sessions to bringing overseas startups to Atlanta, there seems to be no lack of innovation and creative problem solving within the small business scene, and it seems there's plenty we can learn from these success stories.

The companies I mention or link to in this post are just examples that I thought you'd find useful – I don't endorse them or their services. I have no affiliation with them and make no representation about their services.