A good team is way more than the sum of its parts. Here are my thoughts on creating the environment and structures that help a great team dynamic to flourish. 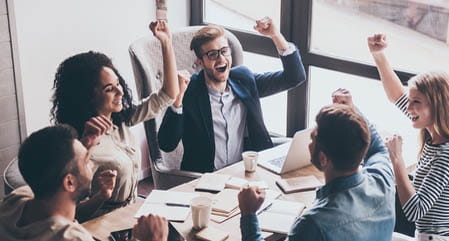 Not all good teams are created equal. What do you picture when you think about a positive team dynamic? For some organizations it’s a tight-knit group that’s full of energy and always ready to tackle a challenge together. For others, it’s a bunch of experts who know exactly who to ask when a problem needs solving, but work independently day to day.

It’s an old chestnut, but it still applies. ‘Hire for personality, train for skill’ is a phrase attributed to Peter Schutz, CEO at Porsche in the mid-1980s. Personally, I couldn’t agree more. Find people in tune with your company culture and existing employees’ ways of working, and be less picky about their experience or qualifications.

People can learn to do new things and work in new ways, but it’s much harder – and arguably outside any reasonable employer’s expectations – to learn to be someone they aren’t.

You know what doesn’t create a great team dynamic? Micro-managing. Teams bond over tasks by figuring out how to solve problems. They get to know each other’s skills by trying out different ways of working. You may already have an idea how things should be done, but there’s value in letting them find their own solution, and stepping in to help only when required. They might even surprise you by coming up with something even better than you imagined.

4. Don’t have too many cooks

Certain personality types are better in small doses. That’s not me saying some people are hard work – it’s a fact about teams. Belbin’s Team Roles model explores how different personality types interact, and identify Shapers – the people that tend to lead and organize – as being best left to one or two per team because their strong personalities can clash, leading to conflict.

For people to feel good about being in a team, they need to have faith in its ability to overcome challenges. That doesn’t have to mean solving the world’s problems. Even fixing a small issue together can create a burst of positive feeling that helps a team bond. It will also build their trust in you as a leader.

I once worked in a team that had a recurring problem with individually purchased food going missing from the refrigerator. It sounds petty, but it was a real killer for morale. Rather than let the passive-aggressive post it notes and bad feeling spiral, we created a shared food fund. Each person paid in a couple of dollars a week, and one person kept the fridge stocked with snacks for the whole team.

When most people think about team dynamics, staying silent is the last thing on their minds. In fact, listening well is one of the most powerful bonding tools there is. Ask your team members to practice active listening, where you focus 100% on the speaker and give them subtle cues to keep talking. Here are some tips on active listening.

Got a problem? Tell the team about it. It can be tempting to ‘protect’ team members from the bald facts when something’s going wrong. Maybe you don’t want to rock the boat, or you think they’ll respect you less. Truthfully, there’s no business on earth that doesn’t run into problems. Turn a challenge into a bonding opportunity by trusting your team enough to be open. Who knows, they might even be able to contribute to a solution.

Take your team out of their day-to-day environment and all sorts of possibilities can open up. Team days may cause a few eyeballs to roll among your staff, but they genuinely are a great way to bond and create shared memories. Here are a few team building ideas.

Not only is it the best policy, it’s the only one that really works long-term. People are social animals, and we’re fantastic at sniffing out a lack of authenticity in one another. Make honesty one of your team’s core values, notice it, and recognize it with positive feedback when you see it.

Lead by example and kick-start the kind of company culture you want to see. Hold yourself to the same values you want your team to adopt, and when you slip up, own it. Change takes time, but it’s worth it in the end when you have a great team around you.