If you think that it’s essential we think outside the box during our thought shower to get the ball rolling, then it might be too late to save you from the grips of Business jargon. Niche office specific phrases are a part of modern life; however, jargon has a long, rich history with the origins of phrases coming from far and wide. Even the word ‘jargon’ is shrouded in mystery, and far from the 1980’s office cliché we know today - the Oxford Dictionary claims that the term originates from Old French and means the ‘warbling of birds’. It’s first referenced in English in Chaucer’s Merchant’s Tale, which dates back to the late 14th century.[1] 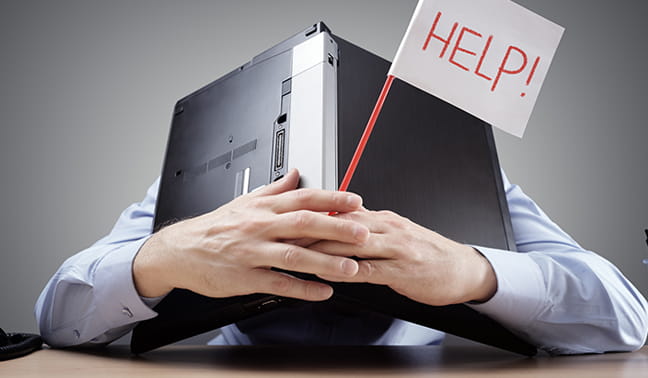 Over time, different industries have developed their own tribal vocabularies, but how did we get here? In the aftermath of World War II, many companies became diversified conglomerates because of mergers and acquisitions. As a result, workers felt disconnected to their increasingly larger companies. Business owners began to question how they could make employees more productive to maximize profits and create an atmosphere that employees wanted to work in. The solution was to encourage what we now know as ‘company culture’- establishing social practices that engaged employees and helped them feel connected to the company and to one another. This, in addition to increased exposure to more conversation opportunities as travel and communication technology improved, led to the overall increase in the prominence of business jargon.

So, why do we love to hate it? Well, if you work in an office it is pretty hard to go through a day avoiding various ‘deep dives’ and without being asked to ‘ping something over’. As humans, it’s only natural to want to collaborate and communicate socially, hence these phrases catch on and spread- just like when we hear a catchy song on the radio and can’t help but hum it. As we’ve been engulfed in jargon for so long it now feels normal in the workplace, though to outsiders, it will seem strange.

At Colonial Life we have delved into amazing data from English language books and Google searches to showcase the popularity of specific jargon phrases, providing a glimpse into their surprising origins. Oh, and we’ve also included some alternative phrases How’s that for a holistic approach? 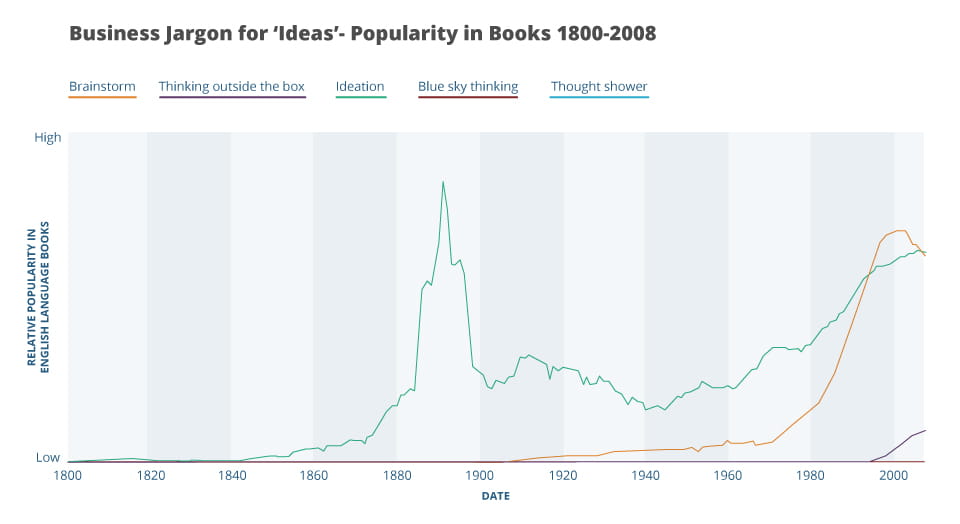 Ideation- to come up with ideas

Related to ‘blue sky research’- scientific research that is not necessarily driven by a specific goal, but is simply exploratory.[3]

Thinking Outside the Box- to think laterally to solve a problem

A reference to a 3x3 dot puzzle, where players must think laterally to draw a continuous line without lifting their pen from the paper.[4] First cited in Aviation Week & Space Technology magazine, July 1975.[5]

‘What else haven’t we tried?’

Brainstorm- a group discussion about ideas

First used in 1849 to describe a ‘Brilliant idea, mental excitement, a fit of mental application’, though not until 1947 was it used specifically for ‘tackling a problem by gathering together spontaneous ideas’.[6]

‘Thought shower’ has become the more politically correct way to say ‘brainstorm’ in recent years as ‘brainstorm’ might have negative connotations associated with epilepsy and fits.[7]

‘Come up with some ideas.’ 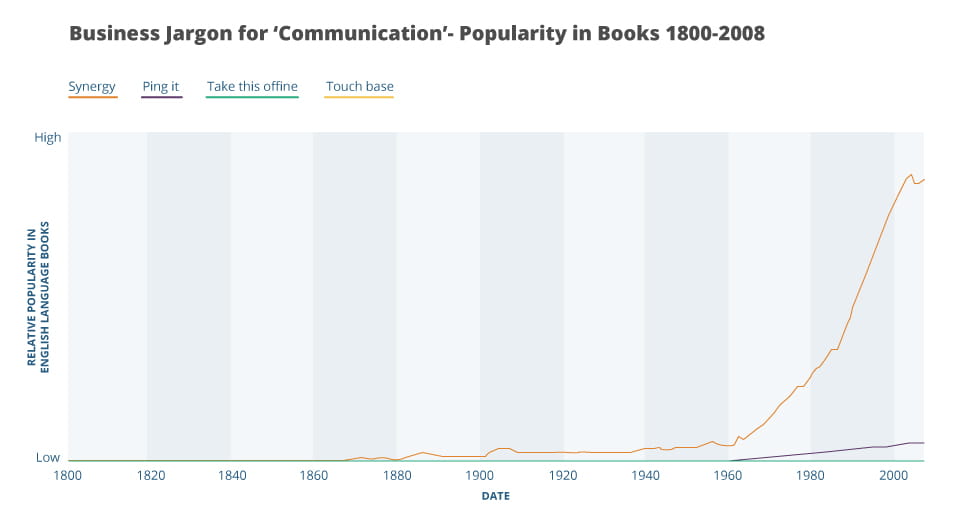 Touch Base- a quick chat to catch up

Originates from baseball, where to ‘touch base’ is to briefly confirm you are not out.[8] Specifically, this term relates to quick chats to catch up.

Take This Offline- to move a conversation to a private channel

‘Let's take it offline’, virtually unheard of before the introduction of computers to the workplace. Originally it suggested that a discussion be moved off a public newsgroup within a company network to private email.[9]

‘Email me the details.’

Synergy dates way back to the 1650’s, originally an anglicised version of the Greek word ‘synergia’, which means ‘working together’.[10] It took off in the 1960s, when increasing numbers of people turned to office work.

Ping it Over- to send something to someone, usually in an email

Originally a ‘short, resonant, high-pitched sound,’ such as “the firing of a bullet”, though the term was later adapted during World War II, by sonar operators who referred to the messages they received as pings.[11] 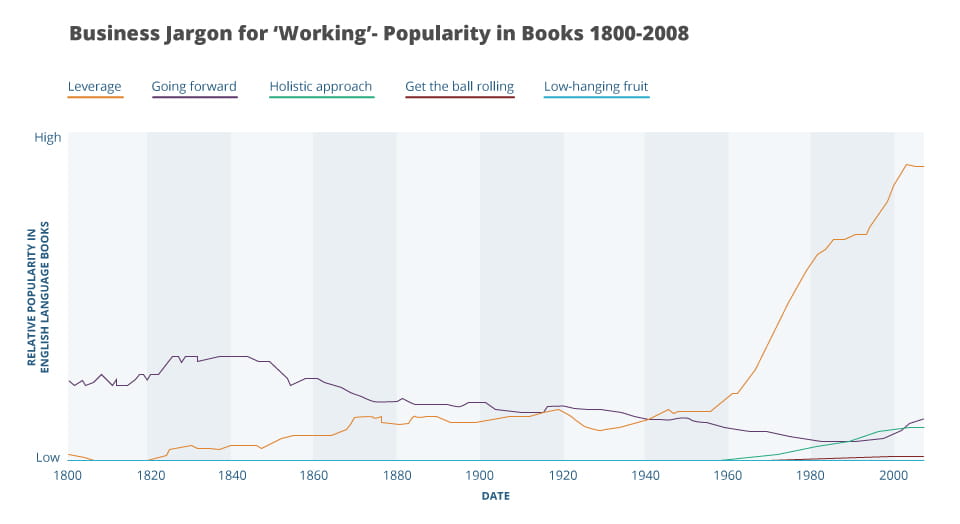 Going/Moving Forward- to look ahead at future plans

‘Moving forward’ alongside ‘thinking outside the box’ have been dubbed the most offensive terms, according to a survey by the Institute of Leadership and Management.[12] In Britain there have even been multiple campaigns to attempt to discourage its usage.[13]

Get the Ball Rolling- to commence something

To get the ball rolling is believed to originate in the genteel 19th century English pastime of croquet, the person winning the toss of a coin starts first and ‘starts the ball rolling’.[14]

Leverage- to use an asset or an advantage

Originally used to explain the ‘advantage for accomplishing a purpose’ in 1858. The financial sense of the term was introduced to American English in 1933, and it was later used as a verb in 1956.[15]

The word holistic originally referenced ‘holistic medicine’ in the 1960s.[16] Ironically, it can now refer to almost anything.

Low-Hanging Fruit- opportunities that are easy to get

References to ‘fruit hanging low’ have existed in the English language since the 17th century, but only in the early 1990’s did it start to gain popularity in the workplace.[17] 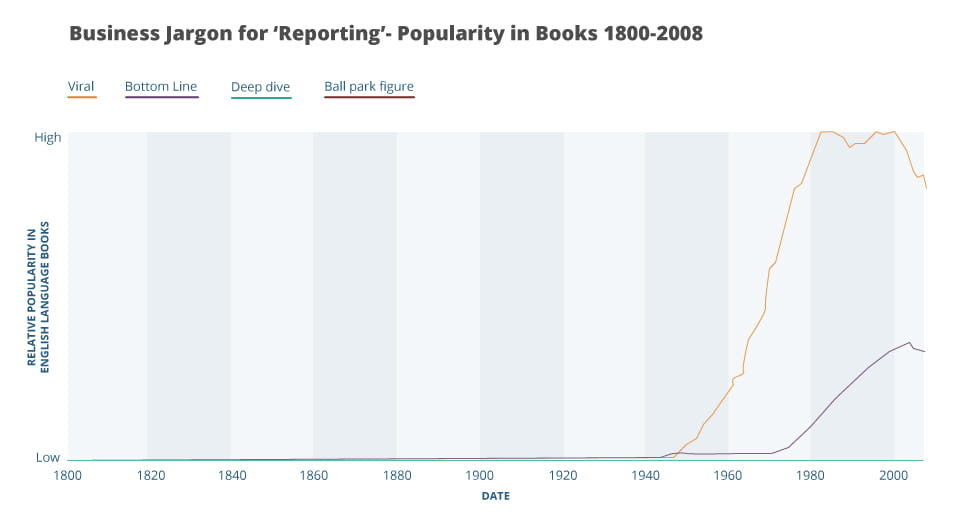 Bottom Line- the most important factor to consider

The logic behind the phrase ‘bottom line’ derives from the ‘sum’ or ‘total’ line at the end of a financial document. This phrase dates back to 1832, so it is a relatively old use.[18]

Ball Park Figure- a rough approximation of a numerical value

Ballpark was originally from "baseball stadium," in 1899. Figurative sense of "acceptable range of approximation" first recorded 1960, originally referring to area within which a spacecraft was expected to return to earth.[19]

Viral- a sudden surge in popularity for a particular fad, usually online

First used in a medical sense, "of the nature of, or caused by, a virus," in 1944. This word eventually came to mean "become suddenly widely popular through internet sharing" by 1999.[20]

Deep Dive- a detailed look into a specific issue

The method was originally used by IDEO for their approach to innovation, focusing on four distinct areas: Process, Organisation, Culture, and Leadership.[21]

Hyperlinks to third party websites are offered for informational purposes only. Colonial Life in no way controls, guarantees, endorses, sponsors, or promotes these websites or their content.

[8] https://www.quora.com/What-is-the-origin-of-the-expression-to-touch-base-with-someone
Hinrichs, Joel Henry. “What is the origin of the expression ‘to touch base with someone?’”. 1/31/18